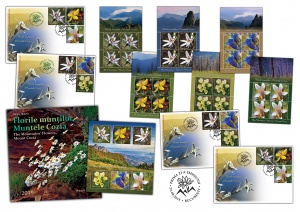 Mount Cozia, a place truly unique,  not just in Romania

Edelweiss (Leontopodium alpinum), the plant that enriches the postage stamp with the face value of Lei 1.40 is part of the Asteraceae family. It is also known as Cliff-hanger flower (Romania), Stella Alpina (Italy), L’étoile des Alpes (France) and Edelweiß (Germany). This plant is often found in alpine and sub-alpine regions. It grows in steep and sunny places on a calcareous sublayer. It is declared a monument of nature and is a true treat that can be found in the Cozia, Maramures, Rarau, Rodnei, Bistritei, Ceahlau, Giurgeu, Hasmas, Vrancei, Ciucas, Barsei, Bucegi, Fagaras, Capatanii, Retezat, Godeanu, Tarcu, Trascaului and Bihorului mountains. It can also be found in the Abruzzi, Alps, Balkans, Carpathians, Pyrenes, in Central and Eastern Asia.

St. John’s wort (Hypericum richeri), represented on the stamp with the face value of Lei 1.60, also known as perforate St John’s wort, is a perennial herbaceous plant that is part of the Hypericaceae family.

Dogtooth Violet (Erythronium dens-canis) is illustrated on the stamp with the face value of Lei 1.70 and is known in Romania as monk’s-plant, Cocoral and Cocorai, an indigenous plant original to Europe (both Central & South) as well as North America. It belongs to the Liliaceae family and is the only species of Erythronium that appears spontaneously in Europe.

The stamp with the face value of Lei 7 illustrates Oxlip (Primula elatior) or true oxlip, which is part of the Primulaceae family. It is a heliophile herbaceous plant that can be found in ravines, meads, fields meadows, forest borders, well-illuminated shrubbery in areas ranging from hillsides towards alpine regions. It is well spread through Europe and Asia and is also known as great cowslip and Bradfield oxlip. This flower blooms between the months of March and May. It is used in both human and veterinary medicine.

The stamp with the face value of Lei 8.50 has Trumpet gentian (Gentiana acaulis) as its subject, part of the Gentianaceae family which is composed of 87 genus and over 1500 species.

These flowers love sunny places, blooming in late-spring and summer (June-July), in meadows or clearings in wooded mountain forests.

The stamp with the face value of Lei 11.50 presents Dittany (Dictamnus albus), an herbaceous plant of the Rutaceae family. Also known as burning bush, gas plant and fraxinella, it can be found in shrubbery, at forest extremities and meadows, from plains until beech forest areas, in Europe and Asia. It is also grown in parks and public gardens with an ornamental function due to its exceedingly beautiful flowers. The flower blooms between May and July and the fruits are capsule shaped with 2-3 seeds per division.

The postage stamps issue THE MOUNTAINS’ FLOWERS,  MOUNT COZIA will be available on Friday, August 23th  2019, in Romfilatelia’s shops network in Bucharest, Bacau, Brasov, Cluj-Napoca, Iasi and Timisoara and online on http://romfilatelia.ro/store/.

The postage stamps issue is completed by 2 “first day” covers, as page composition in sheet of 28 stamps, minisheet of 4 stamps with illustrated border and 1 block of 6 imperforated stamps. 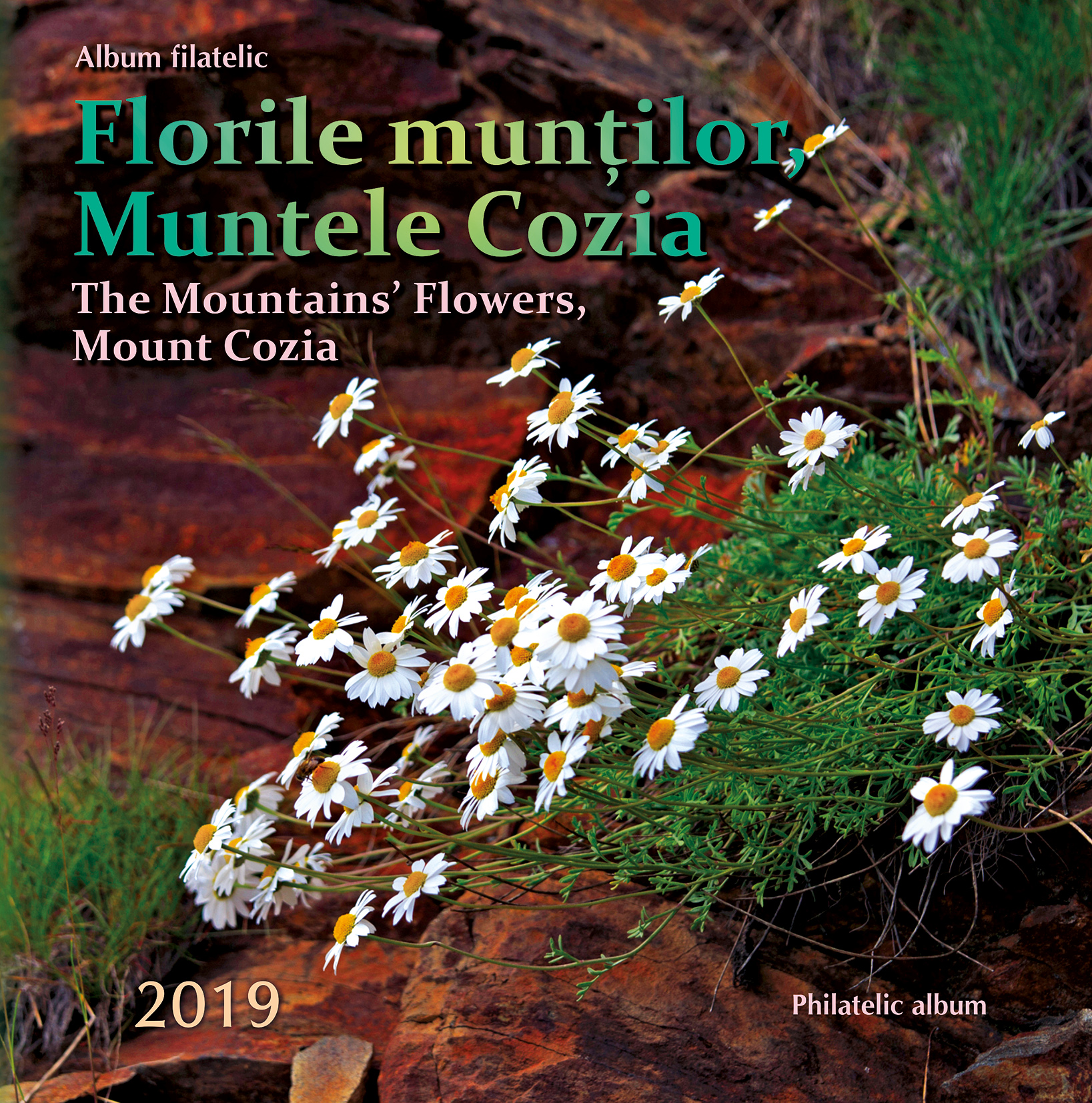 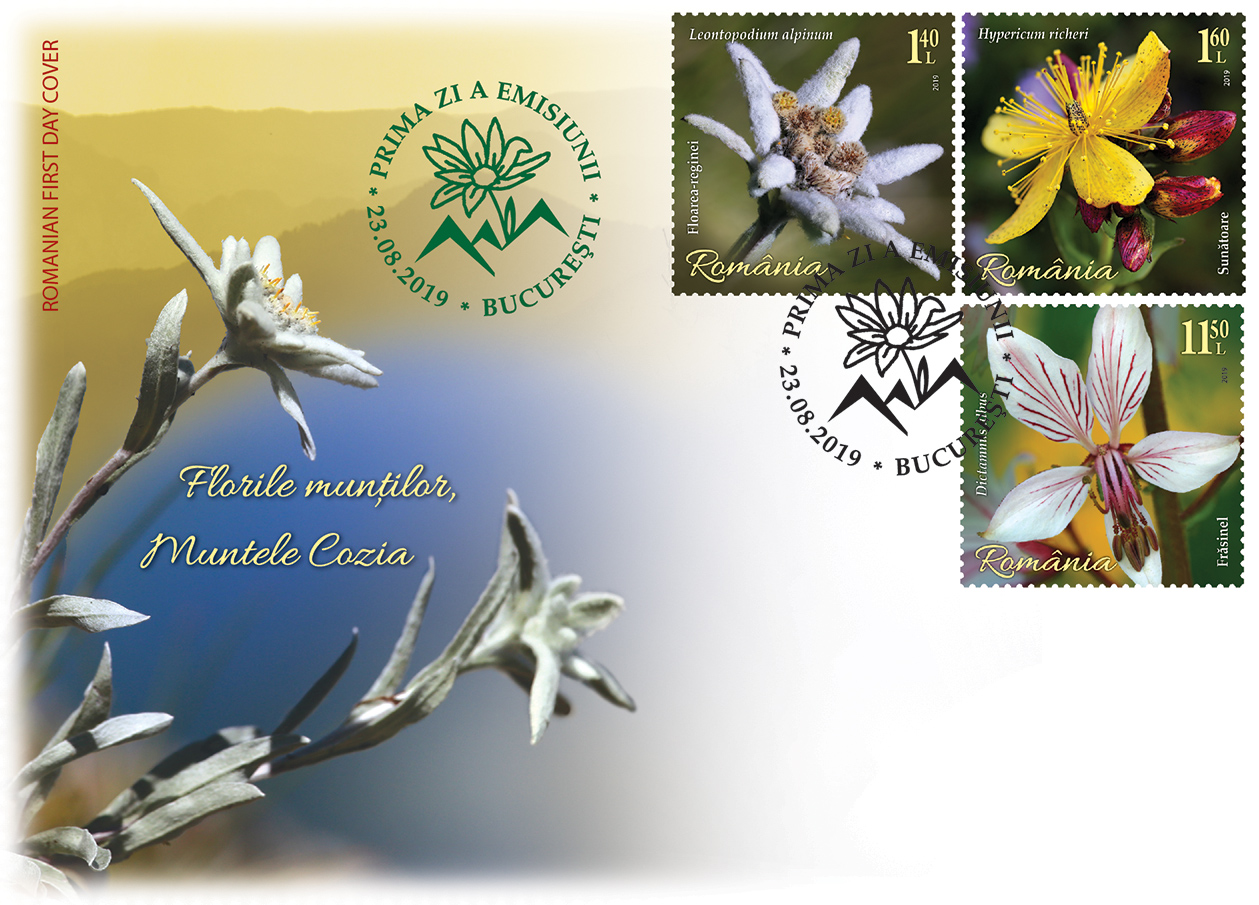 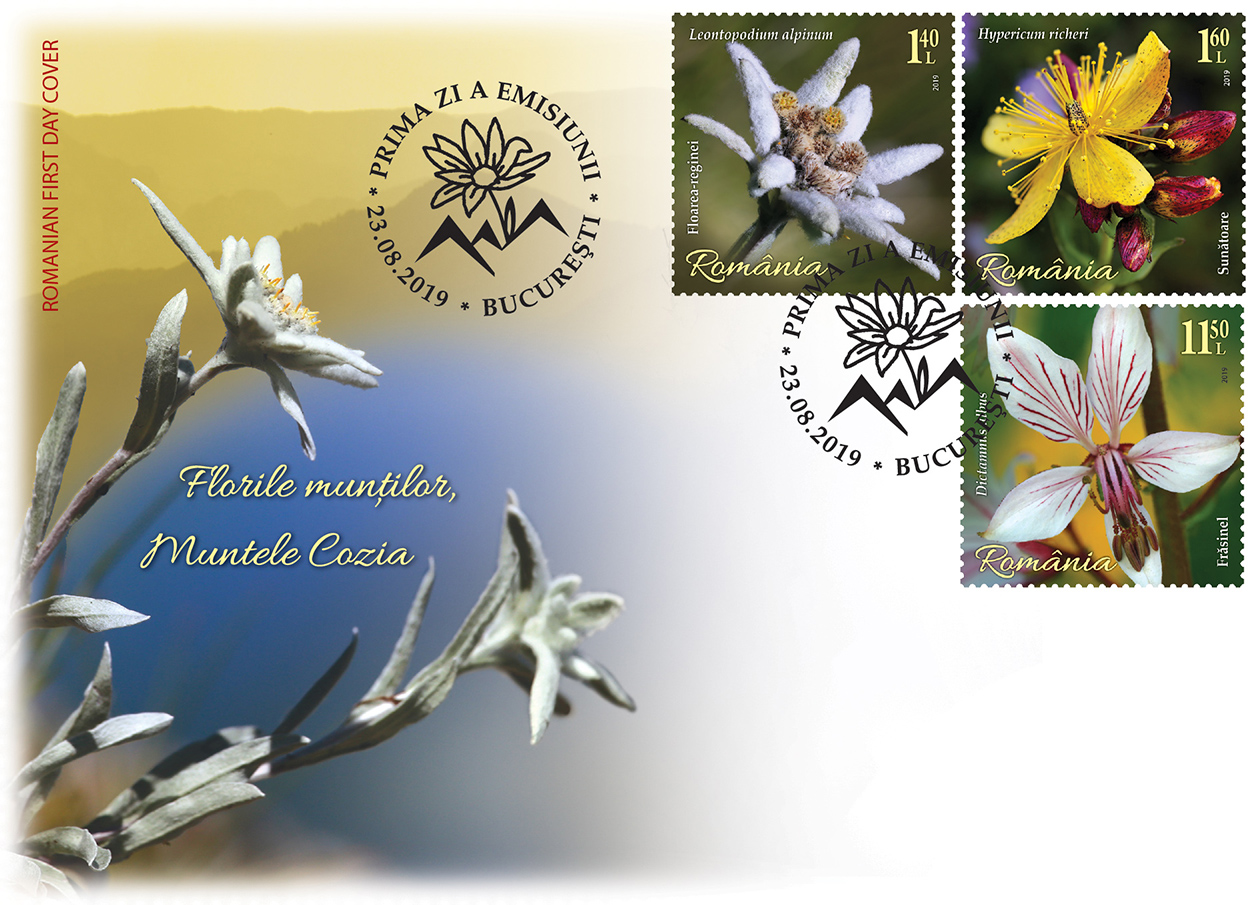 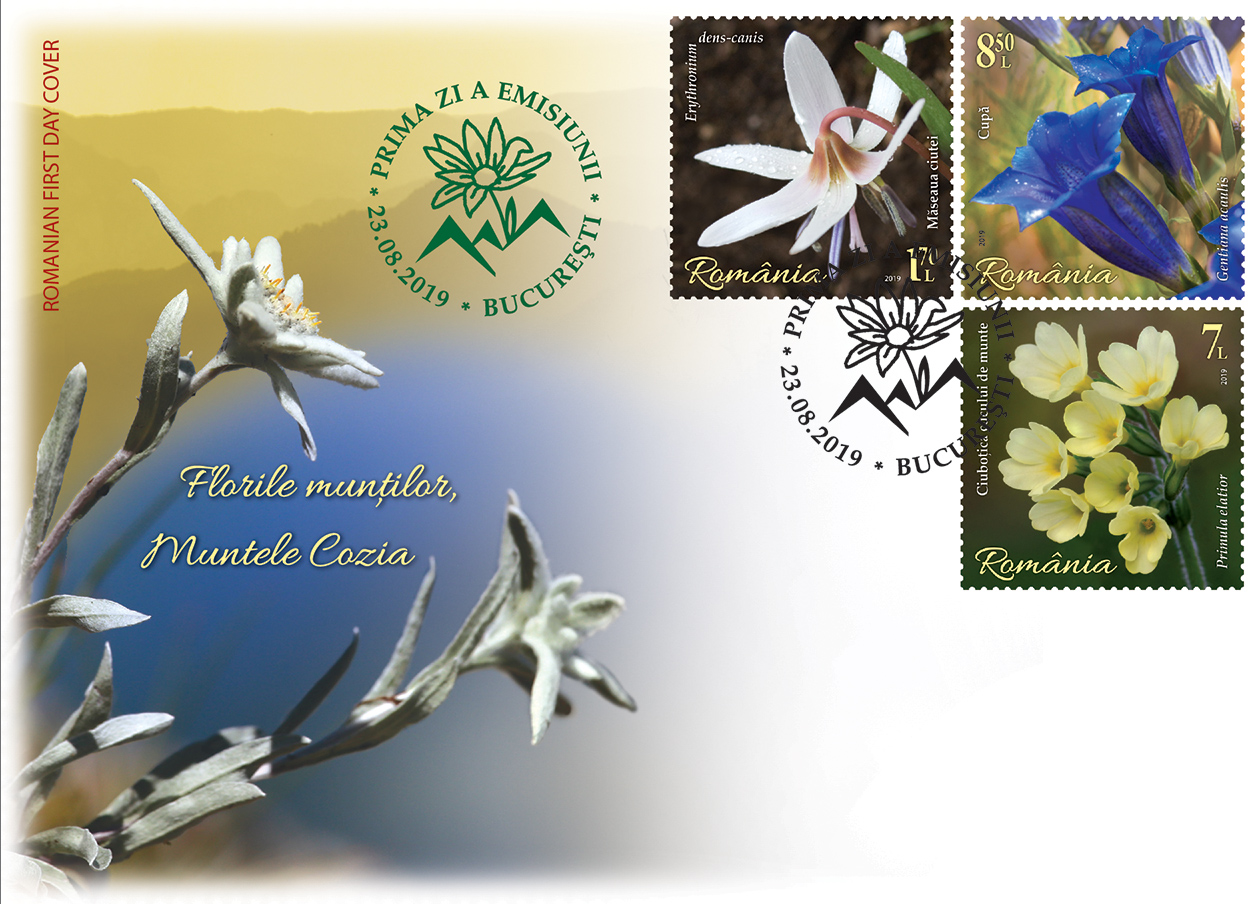 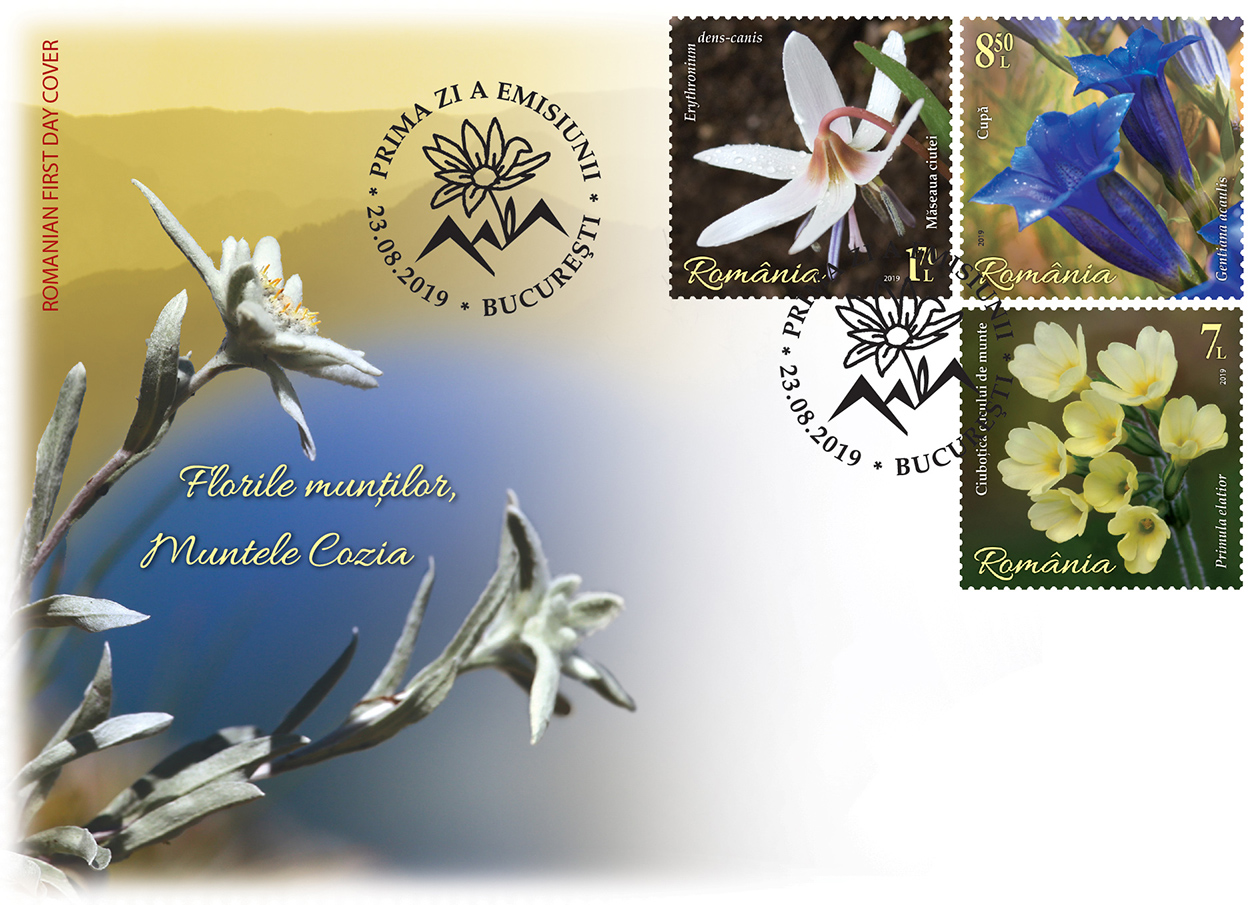 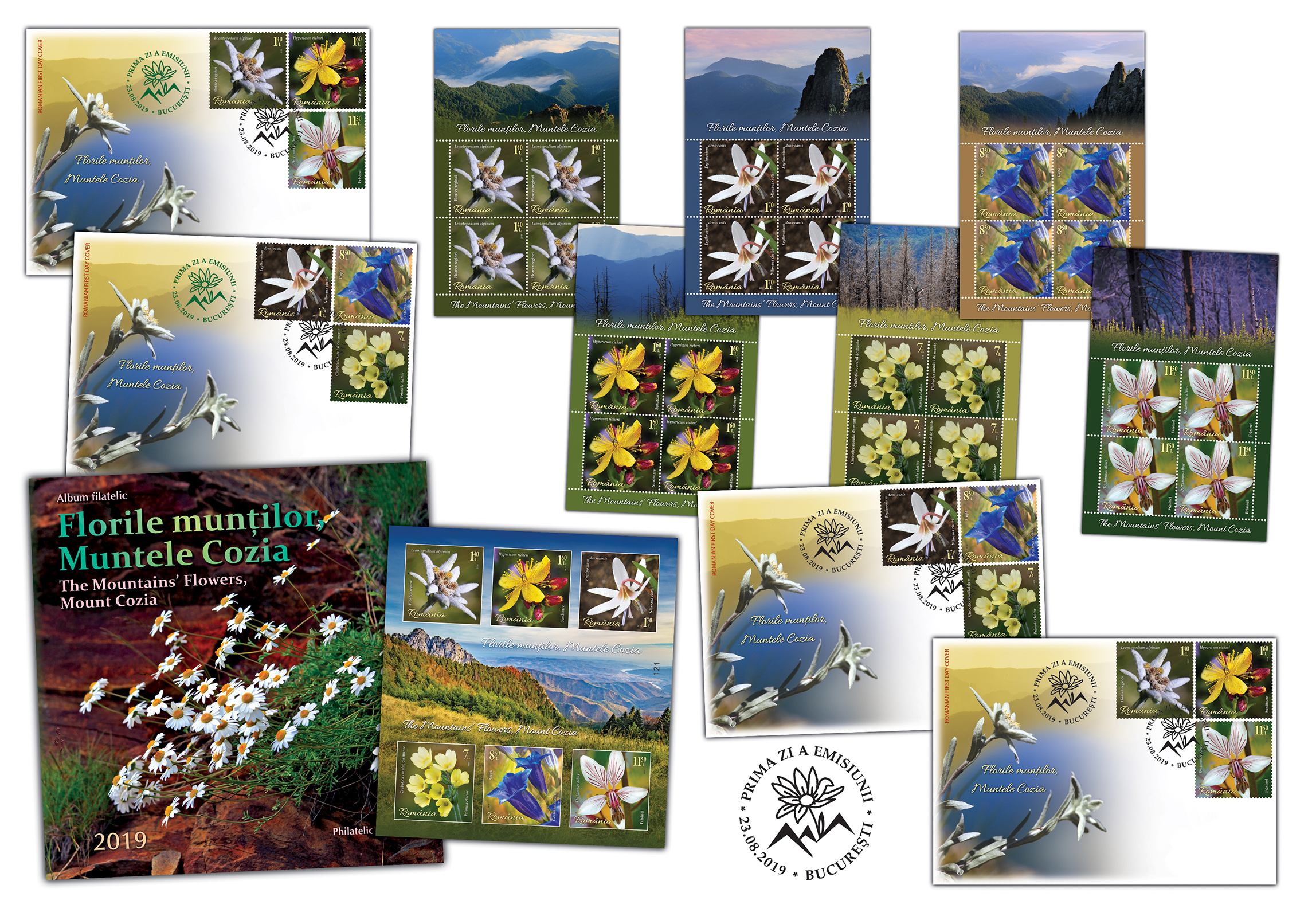 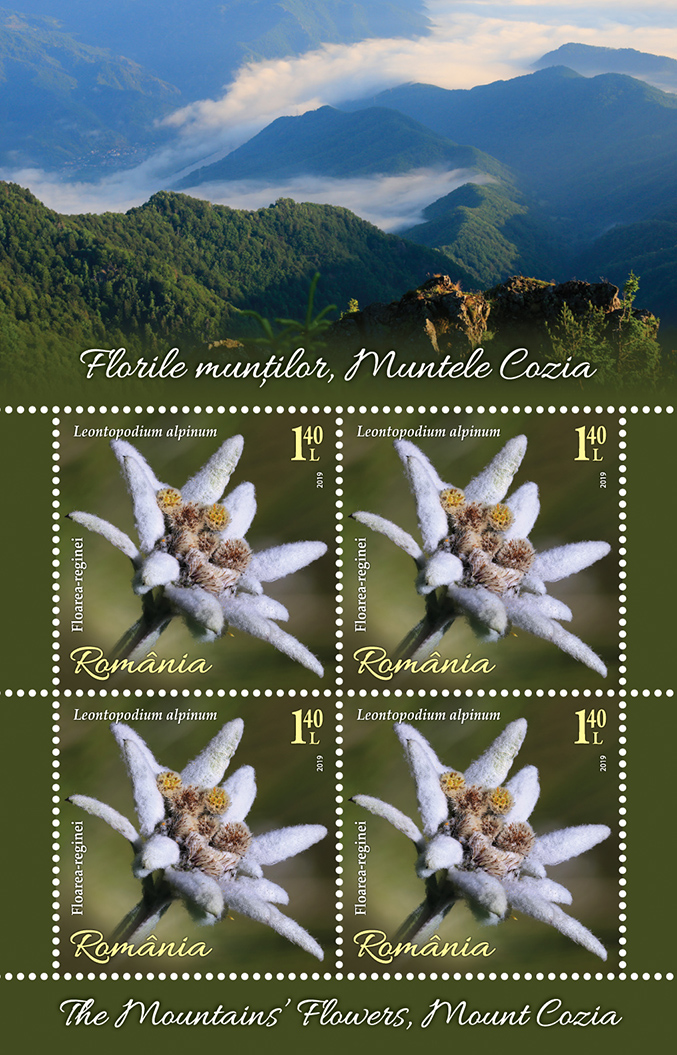 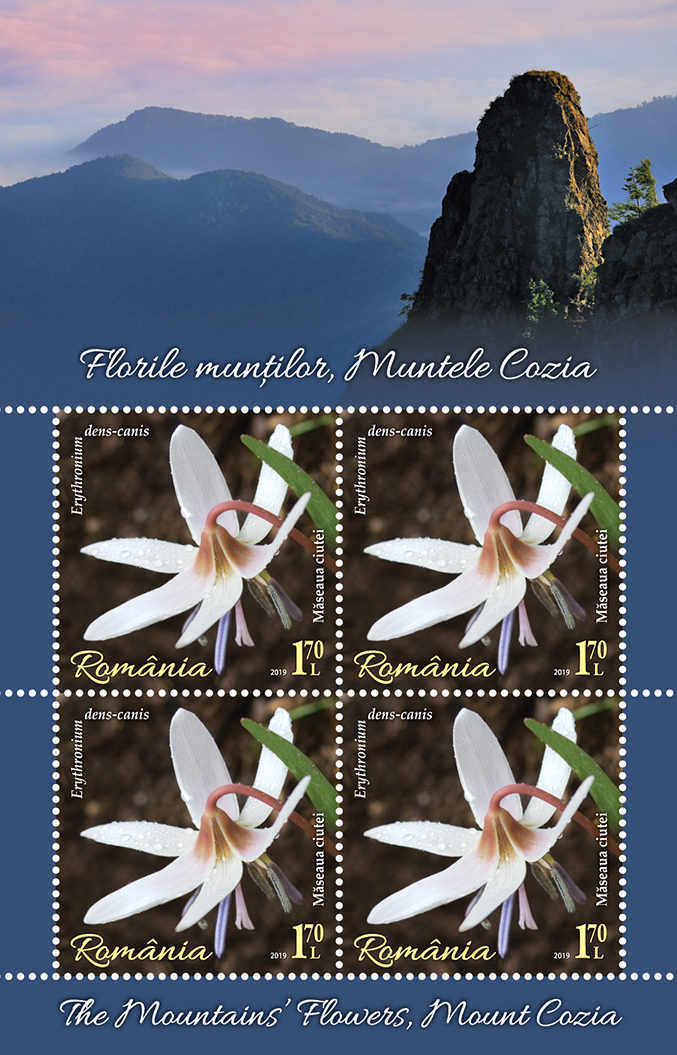 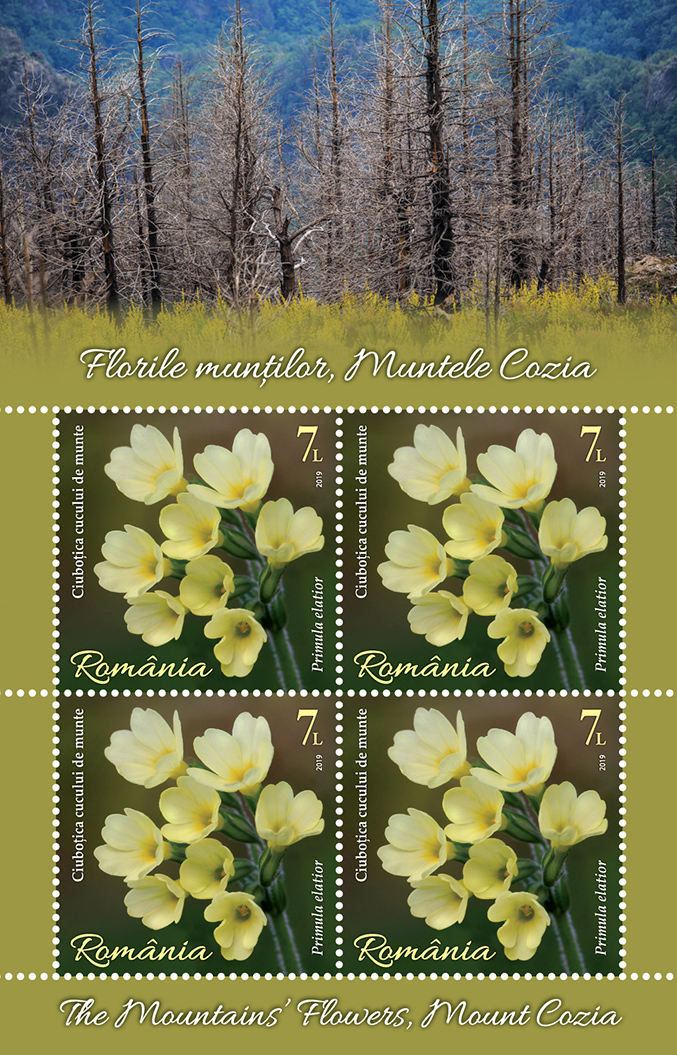 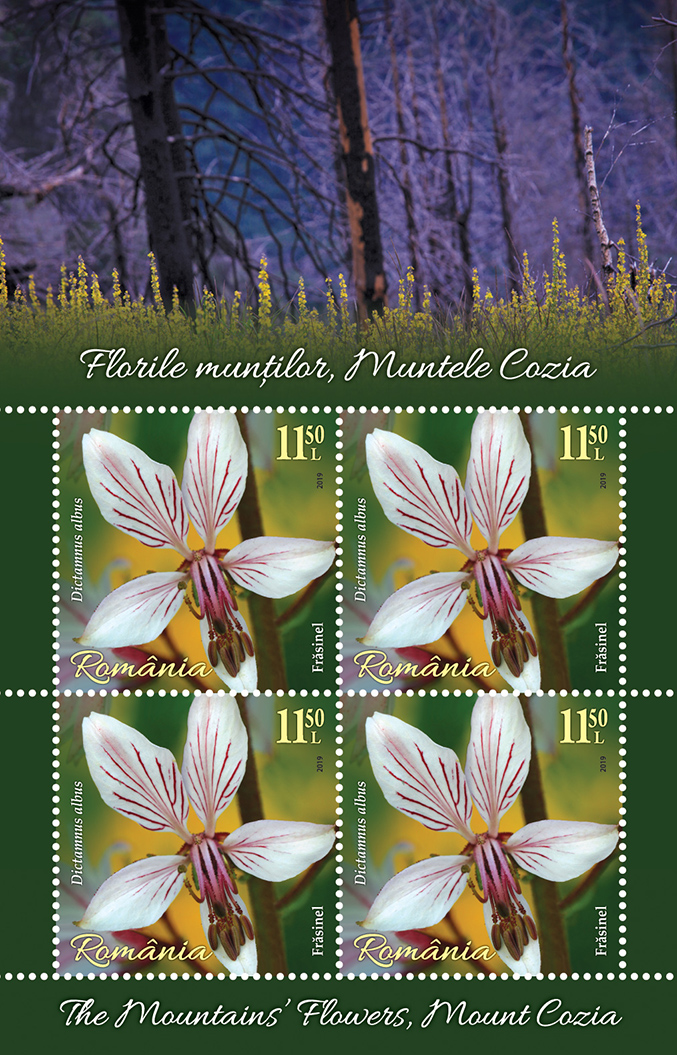 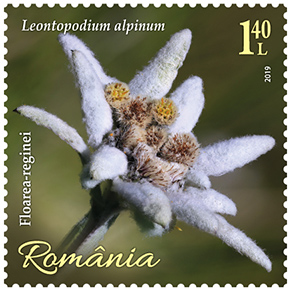 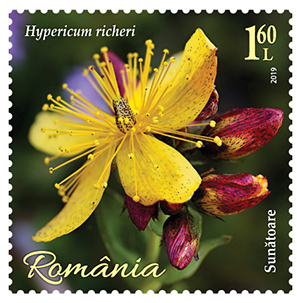 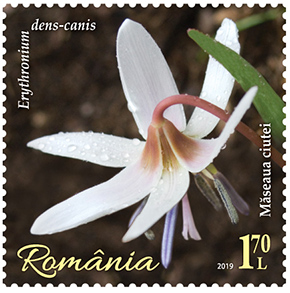 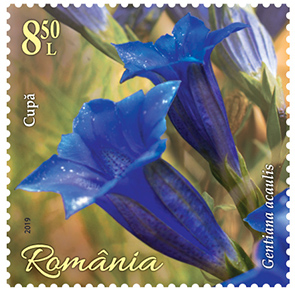 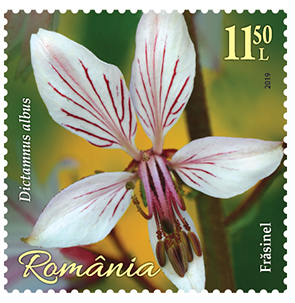 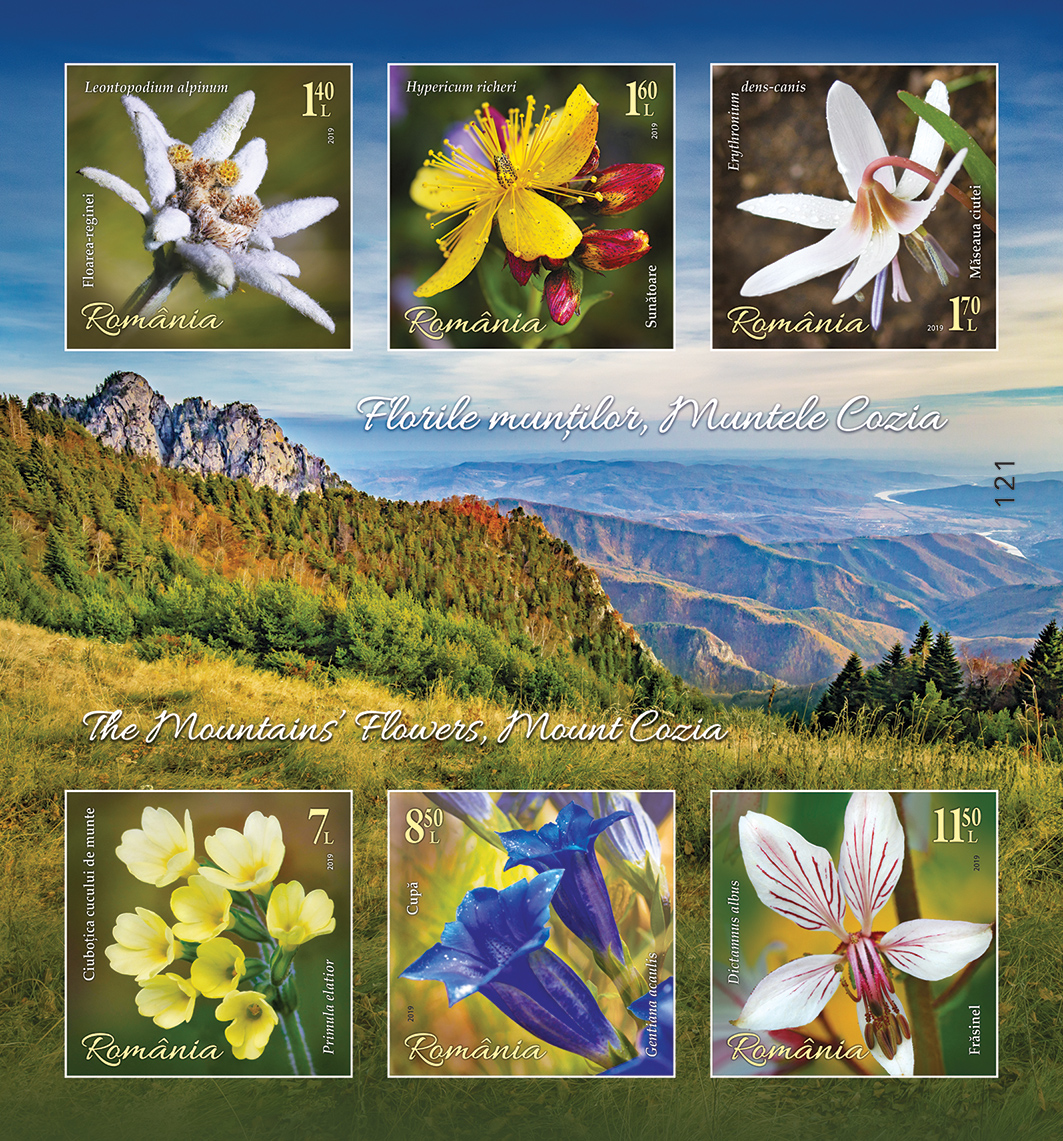