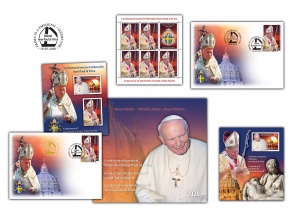 In order to celebrate a century since the birth of Pope John Paul II (1920-2005), canonized by the Catholic Church in 2014, Romfilatelia introduces into circulation on Monday, May 18th, 2020, the postage stamps issue Centenary of the birth of Saint John Paul II.

On May 18th, 1920, Karol Józef Wojtyła, the future Pope John Paul II, was born into a modest family in Wadowice, Poland.

The passage through the world of this “man among men” has a honoured place in the history of Poland, Europe, Catholicism and the oppressive atmosphere caused by the totalitarianisms: Fascism, Nazism and Communism.

For Karol Wojtyła all began in Wadowice: life, school, theatre and priesthood. In 1942, he began his theological studies clandestinely, Poland being under Nazi occupation. In parallel, he wrote poetry and theatre plays, playing as an amateur actor parts in top plays of Polish and universal drama.

After his ordination as a priest, he continued his doctoral studies in Rome (1946-1948). After the defence of his Ph.D. thesis in Krakow, he became an associate professor and advanced in his ecclesiastic career: from priest to bishop, then to archbishop and cardinal.

On May 13th, 1981, the day the Catholic Church celebrated the Our Lady of Fátima, in the midst of a crowd of believers gathered in St. Peter’s Square, he was the victim of an attack carried out by Mehmet Ali Agča, who fired the gun from close range. Seriously wounded, he survived, as if by a miracle considered to be the intervention of the Virgin Mary, defined as follows by the great Pontiff: “one hand fired the bullet, another changed its trajectory”.

Devout believer to the Blessed Virgin Mary, Pope John Paul II inscribed in the coat of arms of his pontificate the capital letter M, the definition of the name MARY.

The personality of Pope John Paul II (philosopher, theologian, poet, playwright) was strongly involved in human history, where he wanted to be and was “above all a pastor”, acting with wisdom and courage so that freedom be coordinated with liability, in favour of a partnership between Culture and the Church.

He promoted ecumenism, fostering Christian unity between Catholicism and Orthodoxy, and not finally, religious dialogue with other religions, especially Jews. From the beginning of the pontificate he led a strong political and diplomatic action against communism, being considered one of the architects of the fall of the systems of real socialism.

A lasting bridge between Pope John Paul II and the spirituality of the Romanian Orthodox Christians is sublimely defined after the visit in 1999: “With this pilgrimage, I wanted to pay homage to the Romanian people and their Christian origins. (…) Over the centuries, the sap of Christian roots has fed through many martyrs and confessors of the faith, an inexhaustible vein of holiness. To you, heavenly mother of hope, I entrust to you especially the families and the young people who are the future of the beloved people of Romania”.

An original moment in the biography of the Nobel laureate, the scholar George Emil Palade, a member of the Pontifical Academy of Sciences, is the one to whom Pope John Paul II, during an award ceremony, put a necklace around the neck. The great biologist politely drew his attention: “Your Holy Father, but I am Orthodox, you know”. The Pope replied politely: “It doesn’t matter dear, how much you have done for humanity exceeds any border of denomination!”

Pope John Paul II, since his ascension to the papal See, from the balcony of St. Peter’s Basilica in Rome, addressed the crowd with the exhortation: “Do not be afraid! Open wide the gates to Christ!”

Regarding the visit to Romania in 1999, the man symbolising the faith and love of his fellow people confessed: “My thoughts always return, with vivid emotion, to the visit that, with God’s will, I had the opportunity to make in Romania. It was an event with a historical significance, being my first trip to a country where Christians are in a majority Orthodox”.

Defining his purpose and role in our world, Pope John Paul II illustrated them in the verses that belong to him: GOD, / in this universe / in the endless world / YOU EXIST / and here I also have my purpose / descended to be in the grave / from death to death going back / if in the dust I am transformed / a small part of Your Passover I am.

Nine years ago, on May 1, 2011, Pope John Paul II was beatified in an impressive ceremony in St. Peter’s Square in Rome. The cause of beatification and canonization began shortly after the transition to the eternal, without waiting another five years, as provided by the canons of the Catholic Church. On April 27, 2014, the canonization ceremony took place, which was attended by one million believers around the world, along with 150 cardinals, 1,000 bishops and over 6,000 priests. St. John Paul II is celebrated in the calendar of the Catholic Church on October 22, the date on which his pontificate began in 1978.

St. Peter’s Basilica is the spiritual and architectural centre of the Vatican City, being built during the period from 1506 to 1626. The building has a total area of over 15,000 m2, and the height of the dome is 119 m. The imposing facade is built in Baroque style, being dominated by a group of statues having Jesus Christ in the centre. The interior has the shape of a Latin cross with three naves; there are numerous statues in marble, travertine or bronze, made by famous artists. In the centre of the basilica is the tomb of St. Peter.

The Pietŕ statue was made by Michelangelo Buonarroti during the period from 1498 to 1499, for the funerary monument of the French cardinal Jean de Billheres. The work of art was moved to the entrance of St. Peter’s Basilica, on the right, in the eighteenth century. The statue depicts the Virgin Mary holding Jesus in her arms, after descending from the Cross.

The philatelic album, created into a limited edition of 311 pcs., is equipped with the special block of 2 imperforated stamps and the “first day” cover of the issue having the “first day” postmark clearly imprinted in gold foiling. Both products are numbered from 001 to 311.

Romfilatelia thanks the Apostolic Nunciature in Romania and Monsignor Ionuț-Paul Strejac, Prelate of Honour of His Holiness for the support provided for the achievement of this postage stamps issue.

The postage stamps issue “Centenary of the birth of Saint John Paul II”  will be available on Monday 18th  2020, in Romfilatelia’s shops network in Bucharest, Bacau, Brasov, Cluj-Napoca, Iasi and Timisoara and online on http://romfilatelia.ro/store/. The postage stamps issue is completed by “first day” cover,  in sheet of 32 stamps, minisheet of  5 stamps + 1 label, perforated souvenir sheet and special block of 2 imperforated stamps. 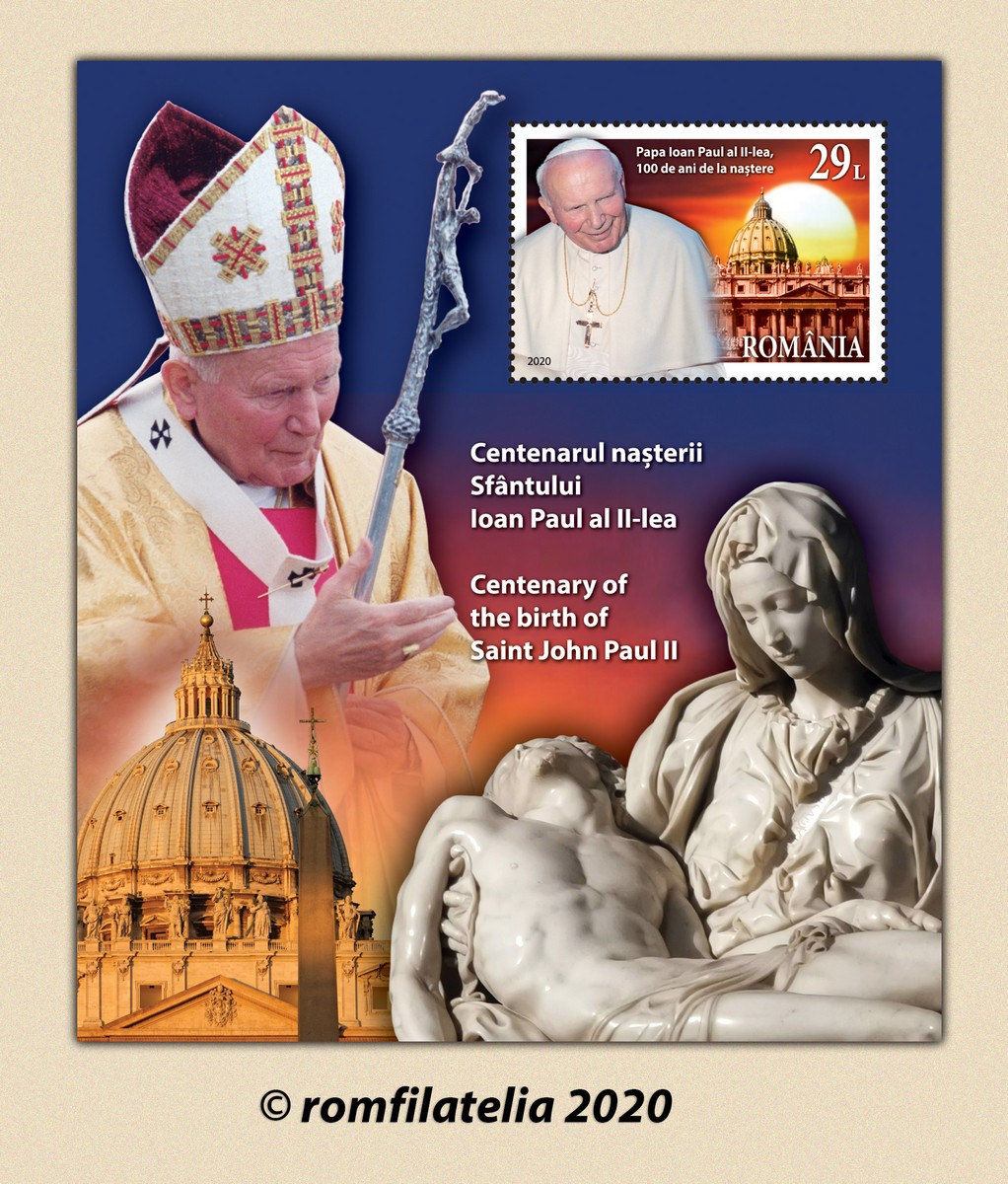 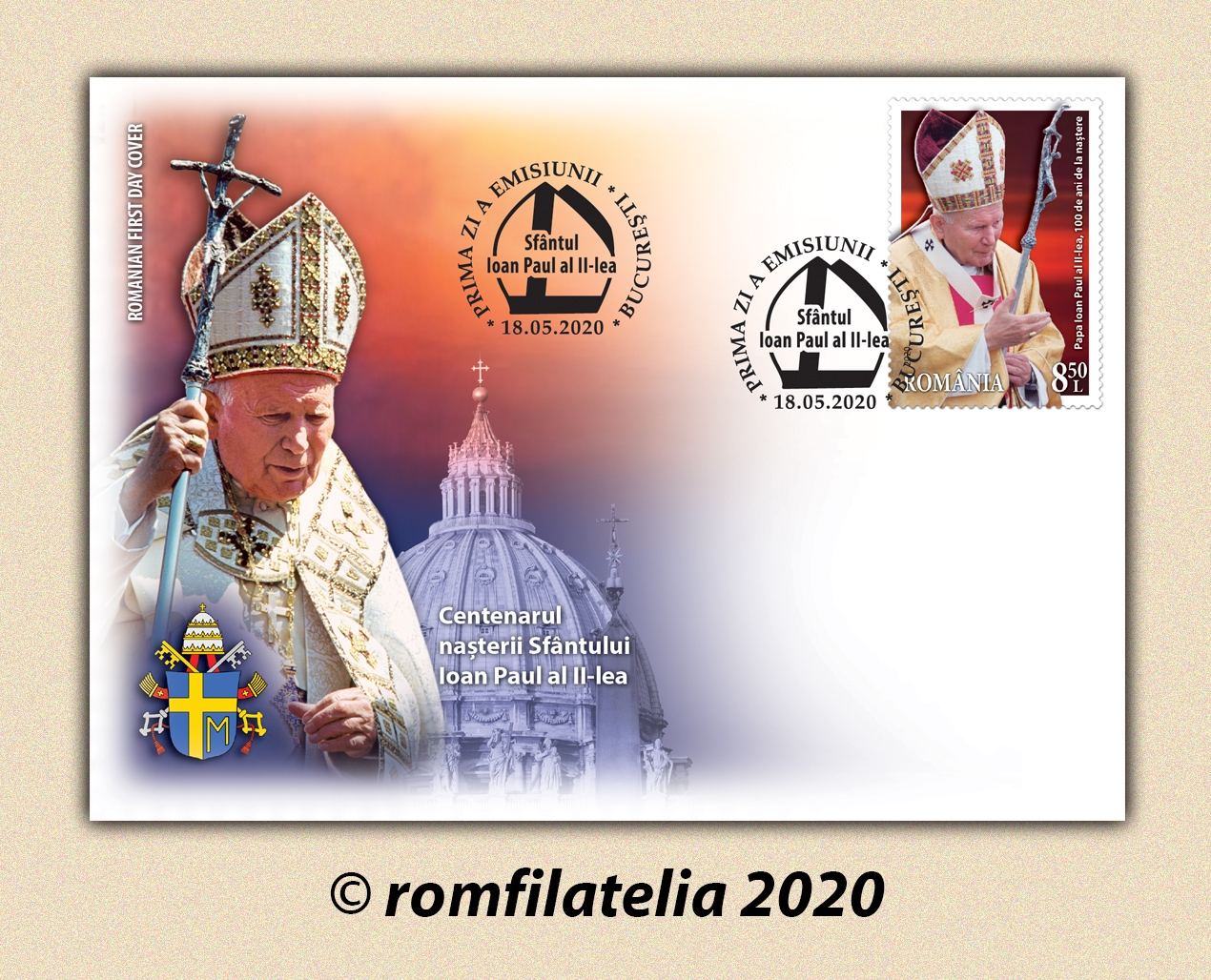 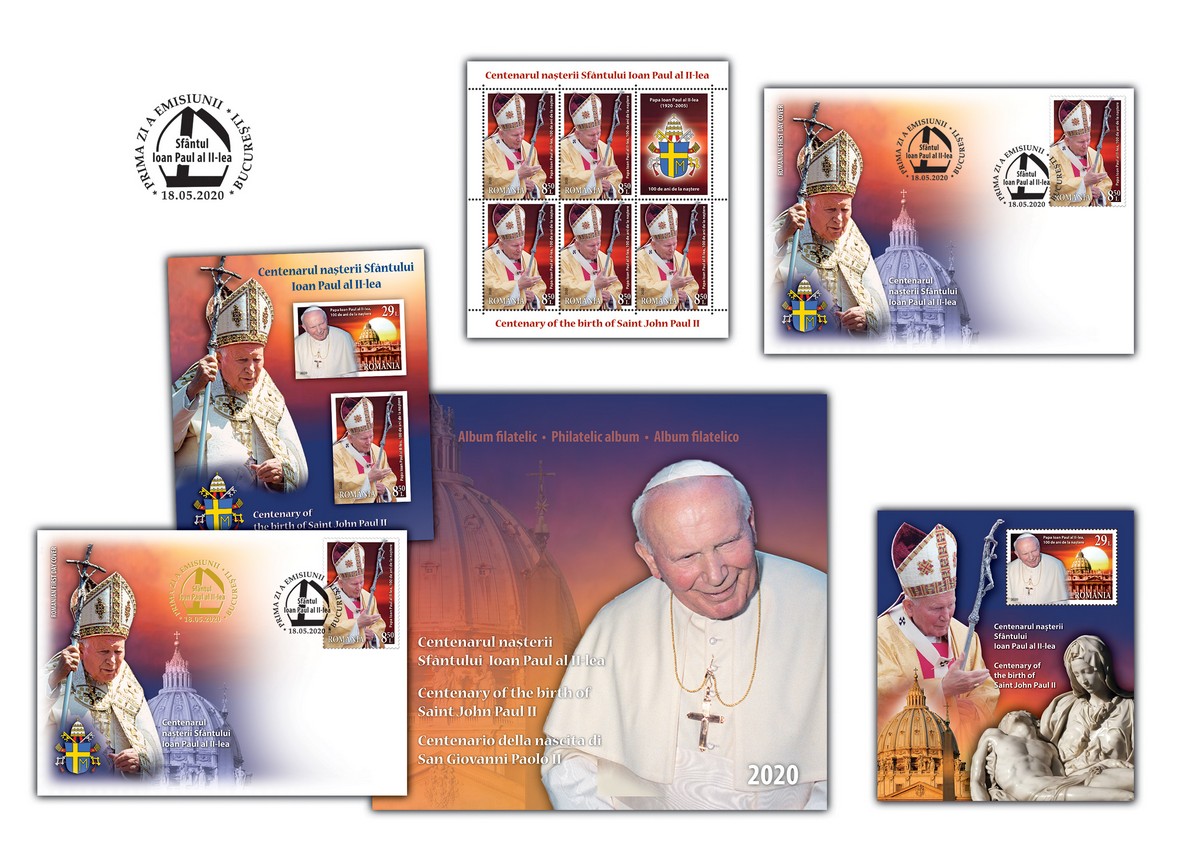 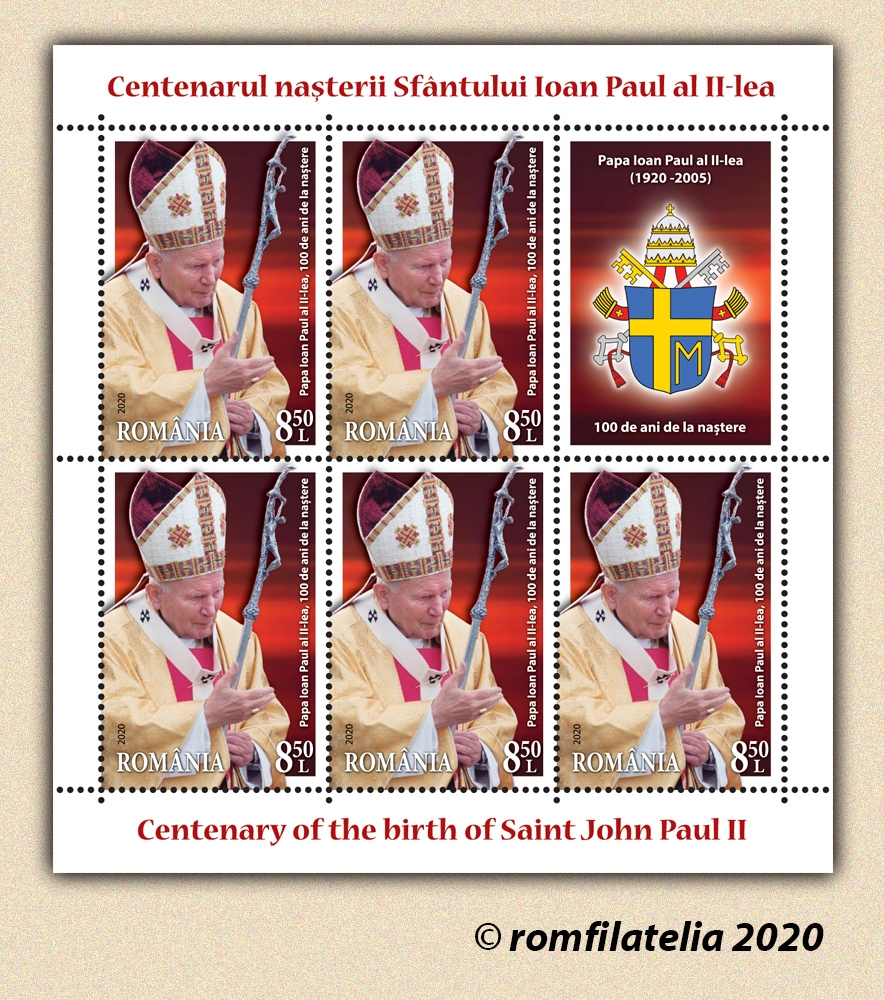 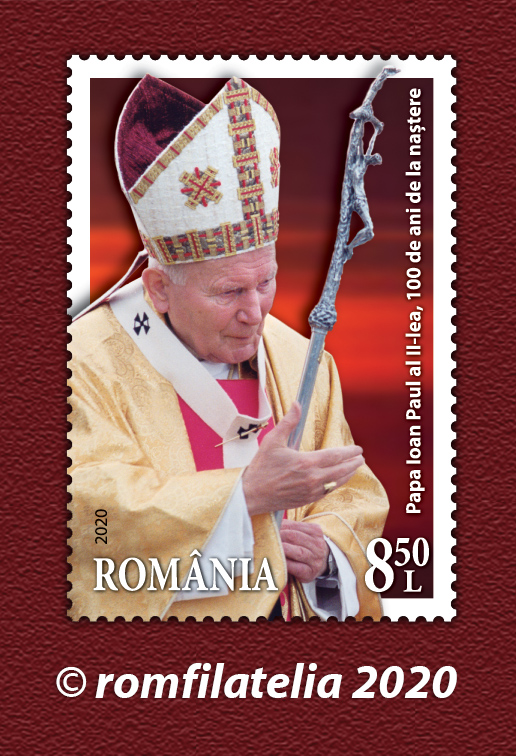 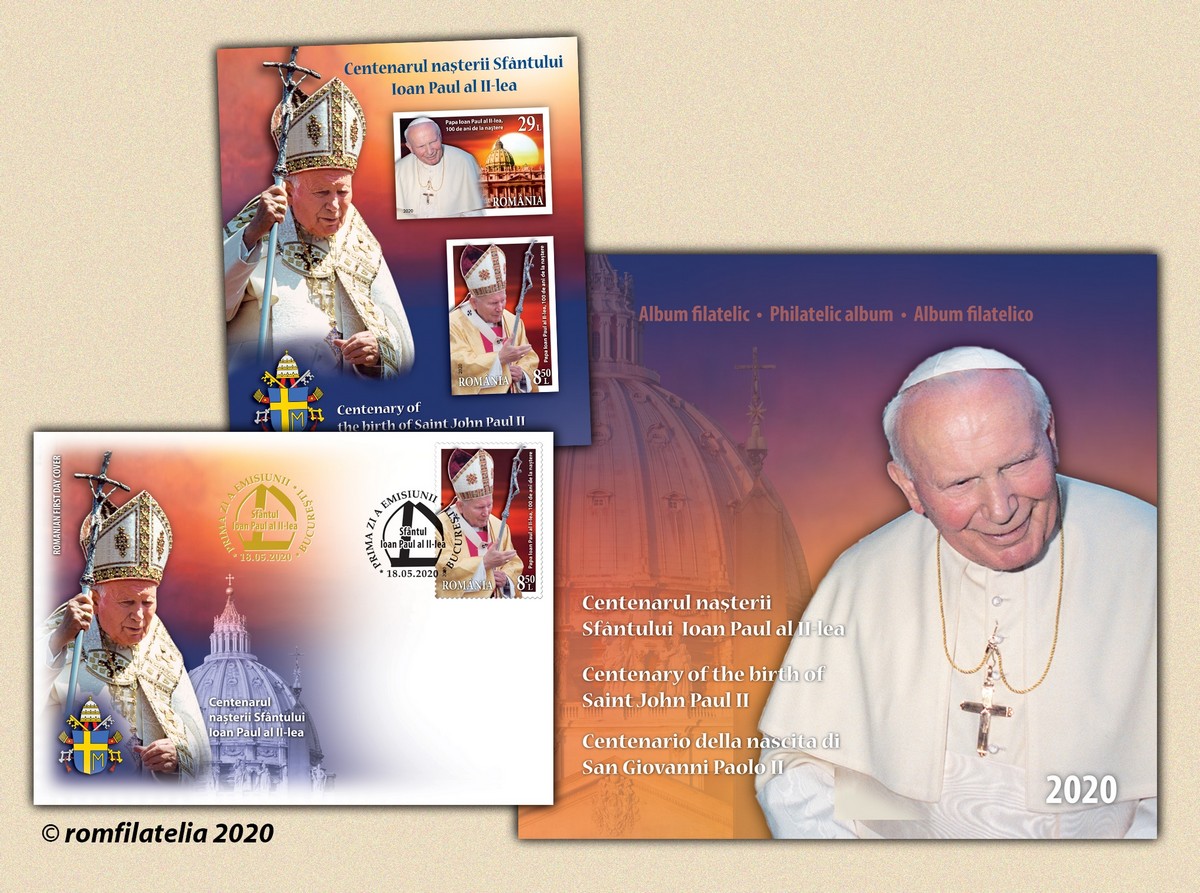