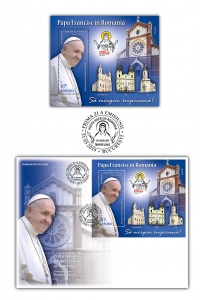 Romfilatelia, in partnership with the Vatican Post Office, will put in circulation on Friday, May 31st, 2019, the common issue of postage stamps named “2019 Romania-Vatican Joint Stamp Issue. The Apostolic Visit of Pope Francis to Romania”.

The issue is made up of a valuable souvenir sheet, with the face value of RON 11.50.

Pope Francis will be present for the first time in the ʺGarden of the Mother of Godʺ, as Romania was named by Pope John Paul II in the Apostolic Visit in May 1999. At that time, Romania was not a member of the European Union, but the Pope’s visit took place under the sign of unity, placing Romania in the attention of the international media.

In front of the Patriarchal Cathedral, Patriarch Teoctist confessed to the Sovereign Pontiff that he received him ʺon this lighthouse of the Romanian nation, witnesses being, along with us, the hierarchs, the clergy and the present people. In the person of Your Holiness, we receive and honour the Church of Christʺ.

The visit ended in a communion, a true fraternity, a unique rapprochement in the history of the Orthodox and Catholic Churches, strongly manifested in the Izvor Park area of the Capital, where

thousands of Orthodox and Catholics chanted with a vibrant emotion: ʺUnity, unity!ʺ Referring to this moment, the Metropolitan Archbishop Ioan Robu recalls: ʺThe echo of ‘unity’ remains.

Although we do not see much at the surface, this call to unity still remains in the hearts and minds of people, expressed in one way or another. But it is a reality: we want this.ʺ

Regarding Pope Francis’ visit, we can surely say that this is not a repetition of what we experienced two decades ago. He is a new Pope and we will participate in a special event, with a strong echo in the country and beyond.

The name of the Sovereign Pontiff comes from Saint Francis of Assisi. As the Pope himself explained, he chose this name for three reasons: because Saint Francis greatly valued the poor, he was a man of peace and felt a deep respect for the whole creation. And, surely, the poor, peace and caring concern are a priority for Pope Francis.

The Catholic places of worship included in the visit of Pope Francis are Saint Joseph’s Cathedral in Bucharest and the Catholic cult establishments in Iasi, Blaj and Sumuleu-Ciuc. In the holy space of the National Cathedral, the ʺOur Fatherʺ prayer will be uttered.

The slogan of this visit, ʺLet’s Go Together!ʺ, is an urge to communion and the cooperation of all, regardless of religion or ethnicity, in the pursuit of common good, peace and good understanding.

On June 2nd, at Campia Liberatii in  Blaj, the Sovereign Pontiff will officiate the beatification of the seven Greek Catholic martyr bishops: Vasile Aftenie, Valeriu Traian Frenţiu, Ioan Suciu, Tit Liviu Chinezu, Ioan Balan, Alexandru Rusu and Iuliu Hossu. ʺIt is a great joy not only for the Greek Catholic Churchʺ – confessed His Holiness Mihai Fratila, Greek Catholic Bishop of Bucharest – ʺbut to any man of good will who understands that their sacrifice was the sacrifice of a dignified Romania, and it should always be recognizedʺ.

Romfilatelia thanks the Apostolic Nunciature of Romania, the Roman Catholic Archdiocese of Bucharest and Alba Iulia, the Ariadecice of Iasi, the Major Archbishopric of Alba Iulia and Fagaras, the Embassy of Romania to the Holy See, the Vatican Post Office, for the documentary and photographic support for the postage stamps issue.

The postage stamps issue 2019 Romania-Vatican Joint Stamp Issue. The Apostolic Visit of Pope Francis to Romania. will be available on Friday, May 31th 2019, in Romfilatelia’s shops network in Bucharest, Bacau, Brasov, Cluj-Napoca, Iasi and Timisoara and online on http://romfilatelia.ro/store/. The postage stamps issue is completed by 1 “first day” cover, and as page composition with perforated souvenir sheet. 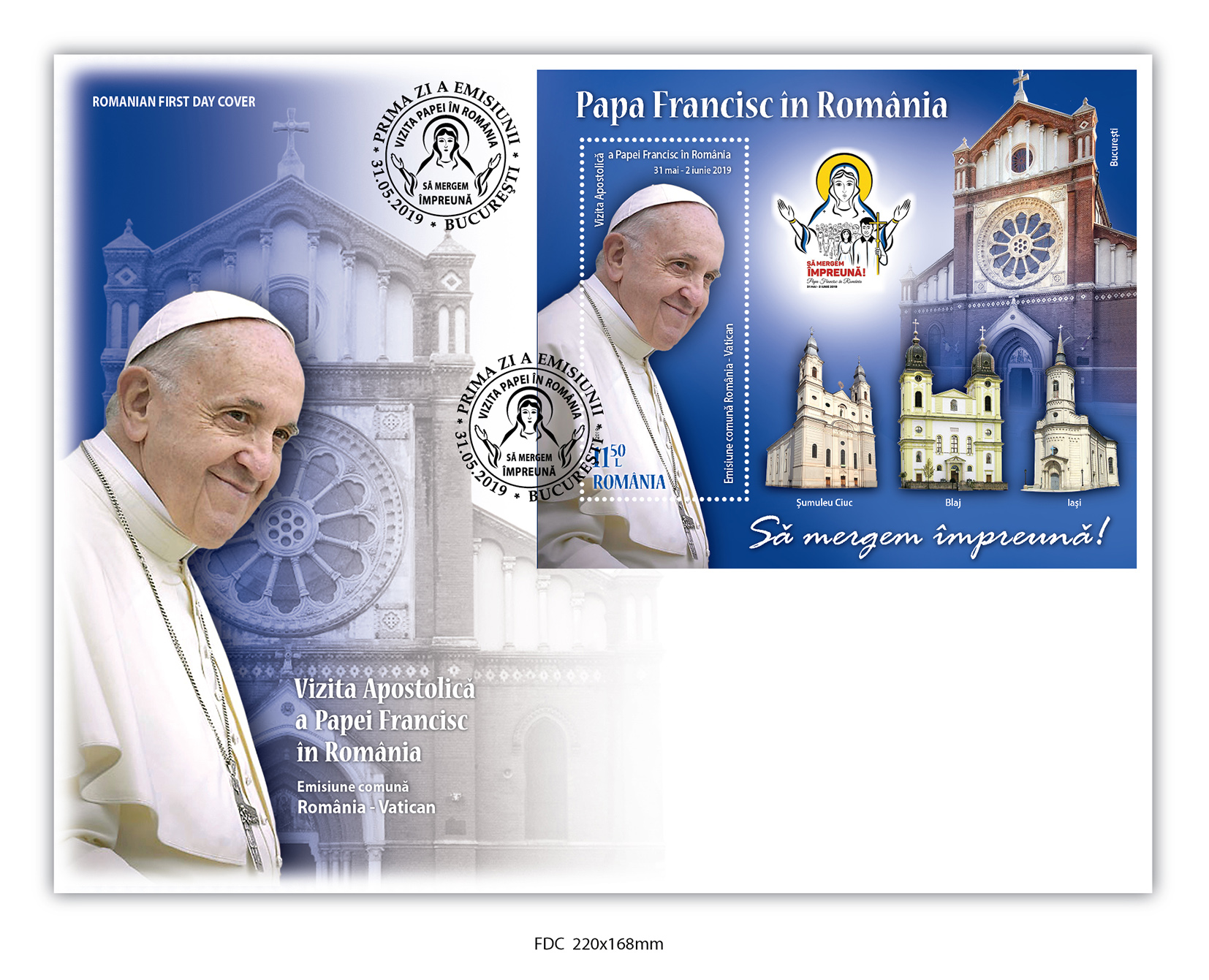 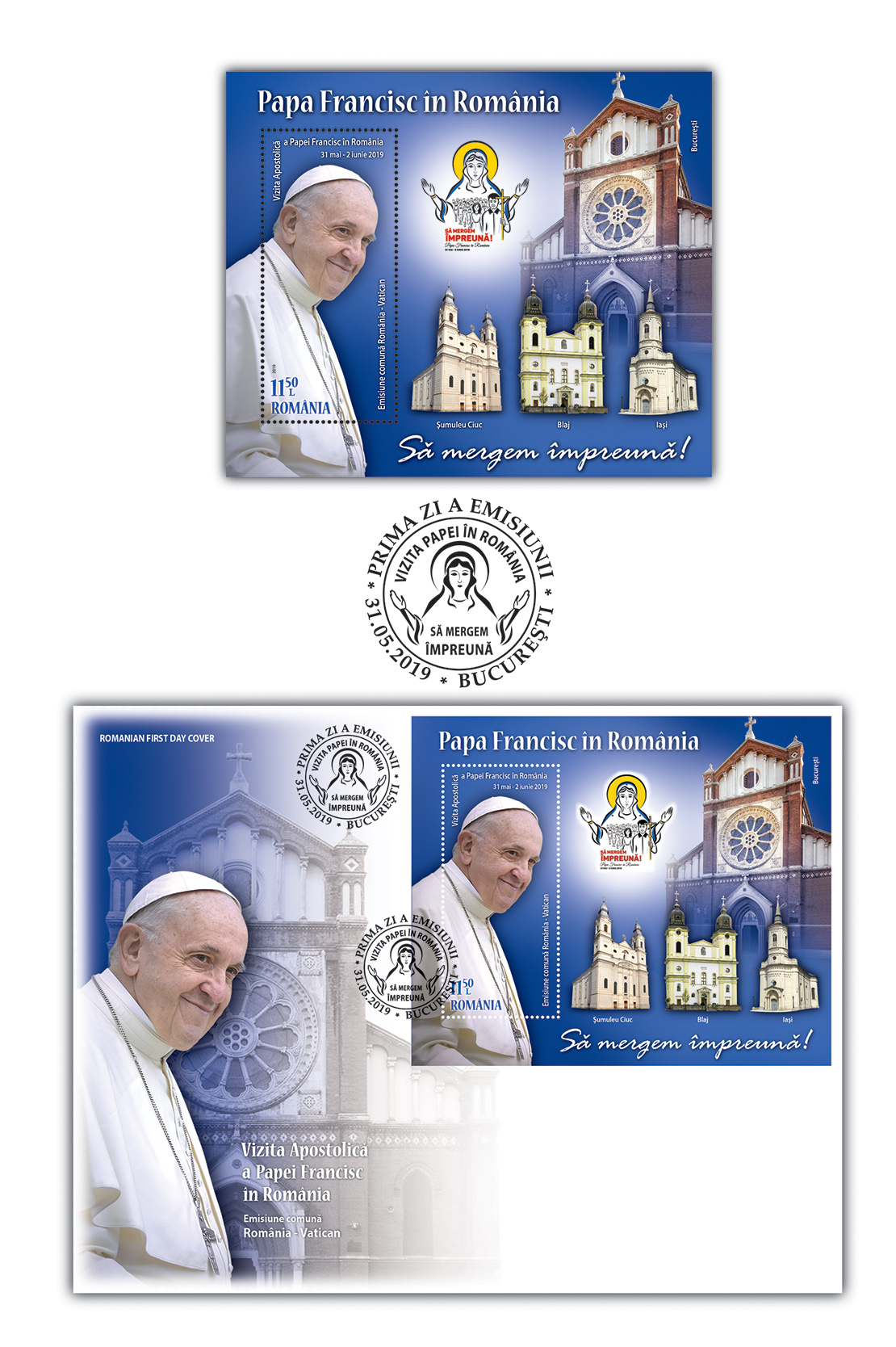 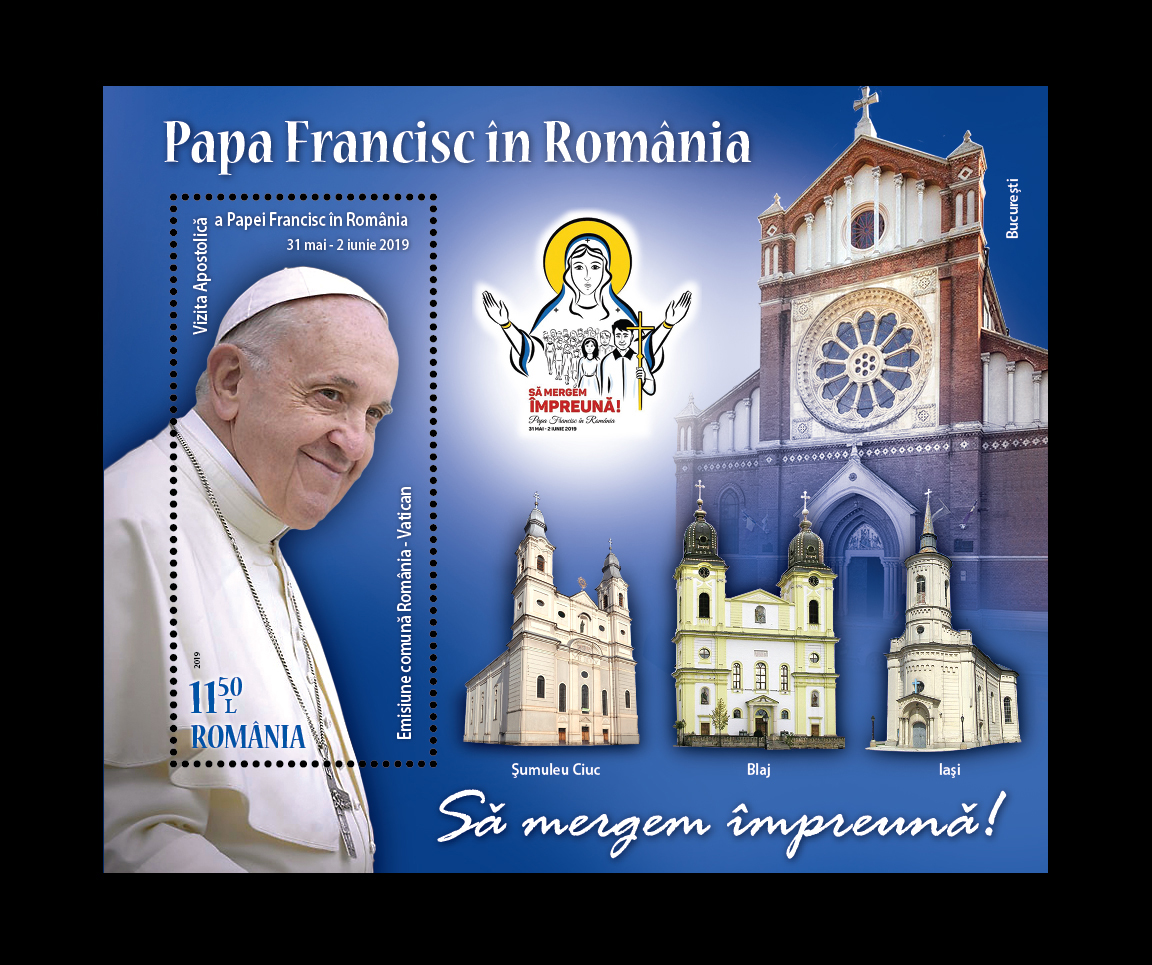